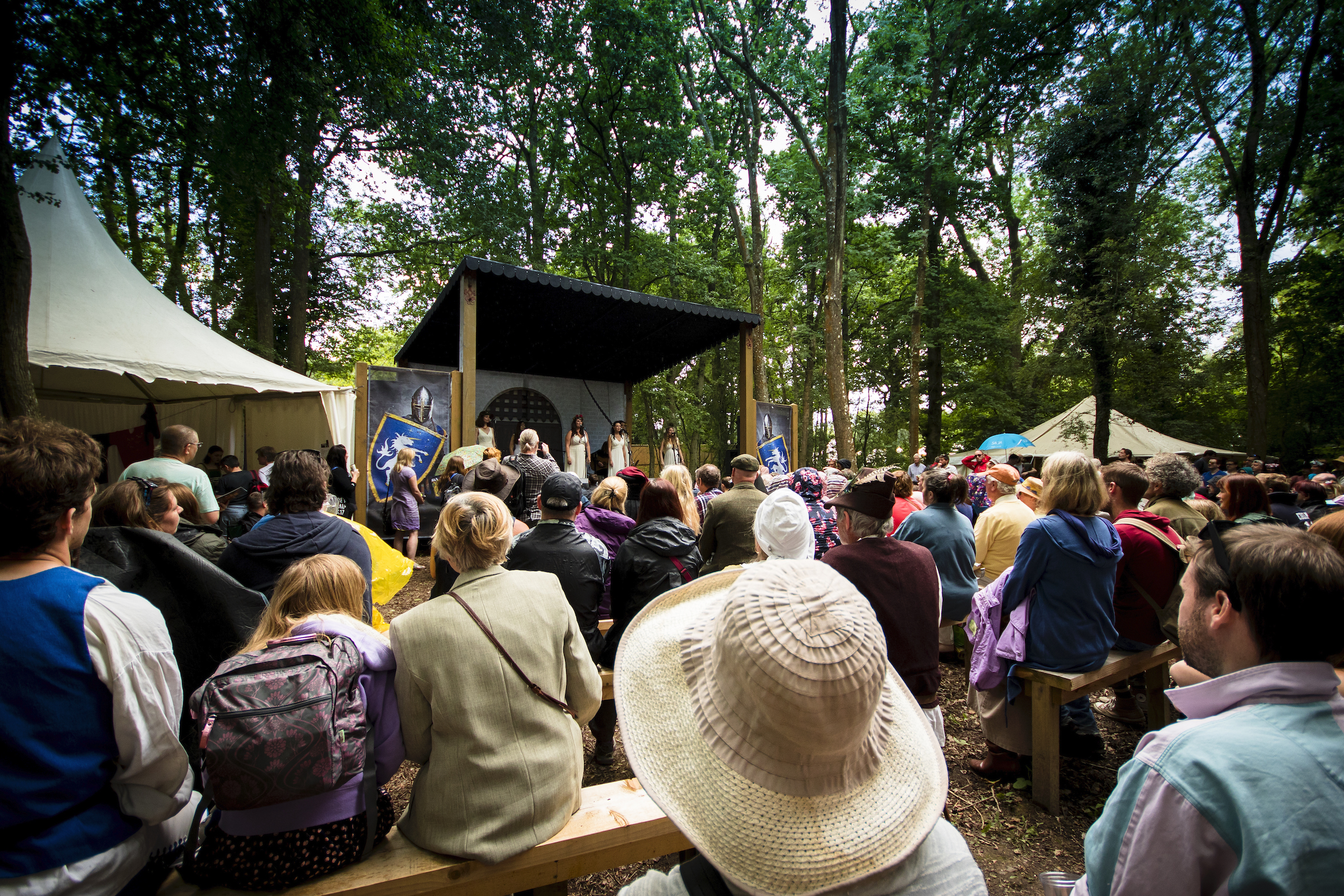 Settle your hindquarters in the enchanted woodland and prepare to be spellbound as artists such as the world-famous Mediaeval Baebes, Trobar De Morte, plus many more take to the Woodland Stage. 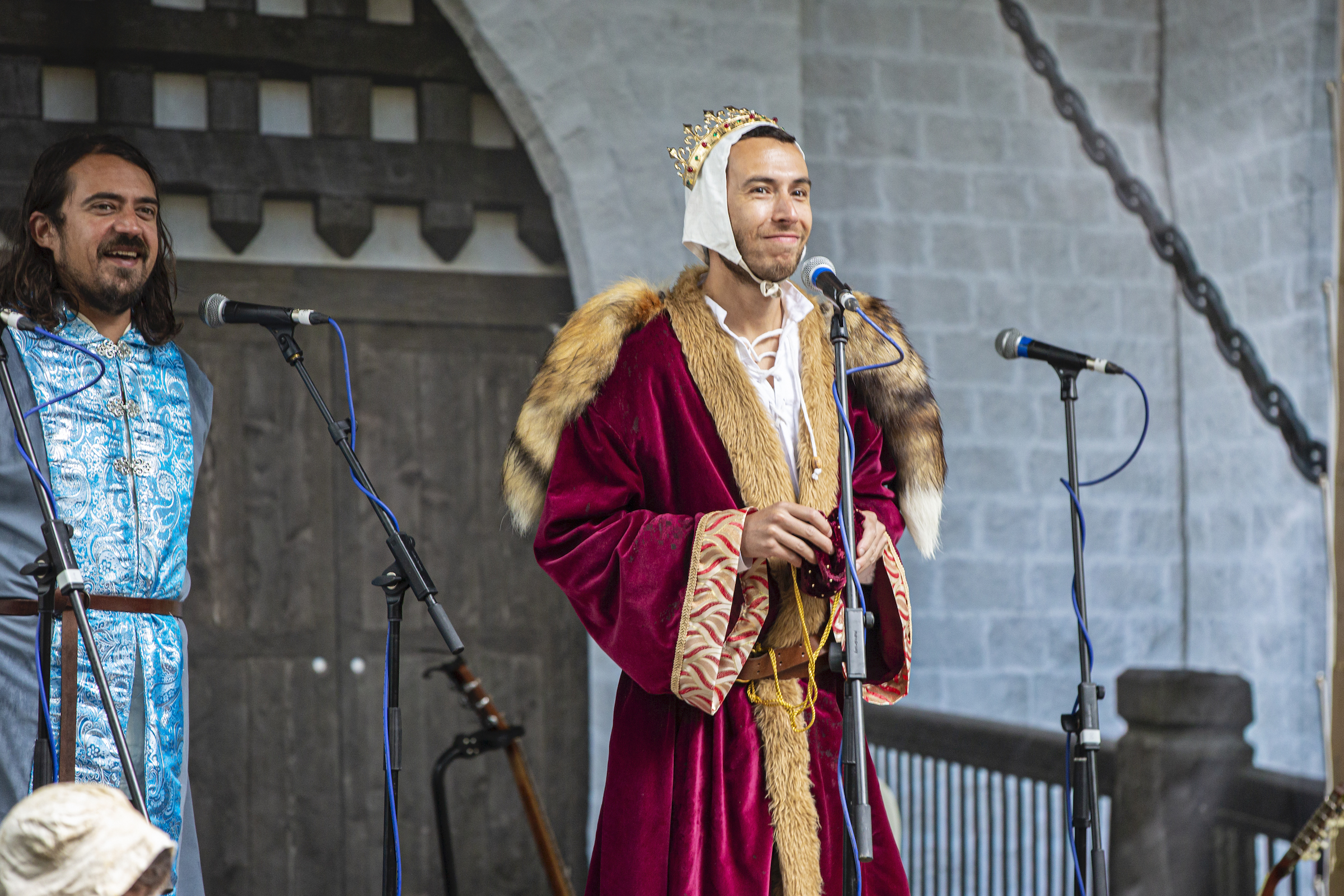 Here is where you’ll also witness the day’s big announcements being made for all of the Kingdom to hear, and bear witness to the succession of the Crown in the coronation ceremony.

The unique, classical chart-topping choir Mediaeval Baebes was conceptualised and formed in 1996 by musical director, composer and producer Katharine Blake. The group have released 8 studio albums, had 2 no.1 classical albums, won an Ivor Novella Award for their performance on the BBC serialisation “The Virgin Queen” and received two Emmy nominations and a Royal Television Society award as the featured artist alongside composer Martin Phipps for the theme tune of ITV’s hit TV show “Victoria”.

Throughout their many incarnations, the Mediaeval Baebes’ haunting classical vocals have led them to tour the world, including UK, United States, Canada, Asia and Europe, in venues ranging from castles and caves to cathedrals & Glastonbury. They have toured with Jools Holland and played at the Royal Albert Hall, Carnglaze Caverns in Cornwall, Jersey Opera House, Tewkesbury Abbey, supported Michael Flatley in Hyde Park, and performed at the legendary Lilith Fayre.

Most recently they were invited by enthusiast Iggy Pop to perform on his Radio 6 Christmas Day special.

Katharine Blake is known for her unique choral writing style, sourcing lyrics from mediaeval and romantic texts which she sets to original scores, as well as reinventing traditional and folk songs, often accompanied by the Mediaeval Baebes’ plethora of mediaeval and folk instruments. Whilst singing in an array of obscure and ancient languages, the Baebes offer a beguiling musical beauty and ethereal talent. The chosen mediaeval texts are mythological, philosophical and dark in topic, meditating upon the inevitability of death, the pointlessness of material possessions, the agony of unrequited love or the dangers of vinous hallucinations. The more familiar material, such as their classic anthology of Christmas Carols “Of Kings and Angels” offers a refreshing and exotic twist to well-known classics.

This year will see the release of the group’s ground-breaking and fantastical nursery rhyme album, which celebrates the contrast of child-like innocence with the surreal and dark content inherent in these ancient rhymes. To mark this long-awaited release, the Baebes will be embarking on a Christmas UK tour, where they will be performing material from this album alongside many seasonal favourites.

Trobar de Morte began life in 1999. It is the most ambitious project of the multifaceted Lady Morte, singer and songwriter.

Having played at several festivals, concerts and tours – including one big tour with Faun in 2011 – and visiting countries such as Germany, Holland, Portugal, Romania, France and Italy, the band has recently collaborated with the Celtic Orchestra of Barcelona and toured through Europe as coheadliner with The Moon And The Night Spirit to celebrate its 18th anniversary.

Trobar de Morte released their sixth studio album “Ouroboros” a few months ago, with which the band went a step further in its musical proposal. Fantasy, folk and medieval music meet in a critically acclaimed record that fills the main core of the current live setlists. Dreamlike and epic melodies find their counterpoint in the most lively Celtic tunes. Altogether mixed in a heterogeneous, albeit mystical combination of traditional instruments.

Recorded at Ax Studios between December 2015 and June 2016, their new album has some stellar collaborations from Fiona Frewert (Faun) on bagpipes and flutes or the Spanish harpist Victor Santal.  Jose Luis Frias (flutes) and Marta Ponce (violins), who were part of the band for several years, have an outstanding participation in the album too. The cover artwork has been designed by the well-known artist Victoria Frances.

With a brand new album featuring guests Cait O’Riordan of The Pogues, Cillian Vallely of Lunasa and cellist Jane Scarpantoni, the group are back by popular demand on their second UK tour.

"A TRULY WONDERFUL DAY OUT FOR ALL THE FAMILY. IT'S MUCH MORE THAN JUST A JOUST" - David W